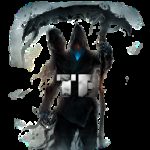 Awesome stuff! Love the displacement! Feel bad for whoever is in the ship  😪

By David Blaker 1 year  ago

Dont worry, its the third in line ship I made, so lets just say it was "misfunctional"