We have recently received many requests to help editors create their videos covering the ongoing coronavirus pandemic.

In response, we created a brand new collection of assets and stock footage that will help you create your information videos, PSAs, news reports, infographics and more. We have also created 2 unique 3D models of the COVID-19 virus.

These digital assets have been built to save time, as you only need to drag and drop them into your project. This can be done in almost any editing software, such as Premiere Pro, After Effects, Sony Vegas, Hitfilm, Final Cut Pro and more.

To maximize detail, the assets are provided in resolutions ranging from 1080p to 4K, ensuring you maintain a high-quality professional look in your project.

Many of these stock-footage elements are even loopable, meaning they can repeat for an unlimited amount of time without any “cuts” at the end.

You can also download the coronavirus videos in 4 different file formats to maximise compatibility including:

ProductionCrate is a collection of over 10,000 stock video elements, VFX assets, sound effects, 3D models, graphics and more, helping over 700,000 creators like you. Feel free to explore our huge collection of content!

With the help of these stock footage elements, we hope you’ll be able to level-up your projects. We ask you kindly not to spread any misinformation related to COVID 19. Remember to stay safe!

You can also enjoy our recent interview with ShutterAuthority here.

If you too find yourself entranced by the peaceful and fluid motion of wispy smoke, you’re in luck! We’ve just released a fantastic bundle of 10 production-ready fog effects, all ready for you to download right away.

Each asset has been pre-keyed, so you can drop these into your composition and make use of the built-in transparent background without any extra preparation.

The 4K resolution also means you will be able to flexibly scale these effects without any noticeable loss in quality. 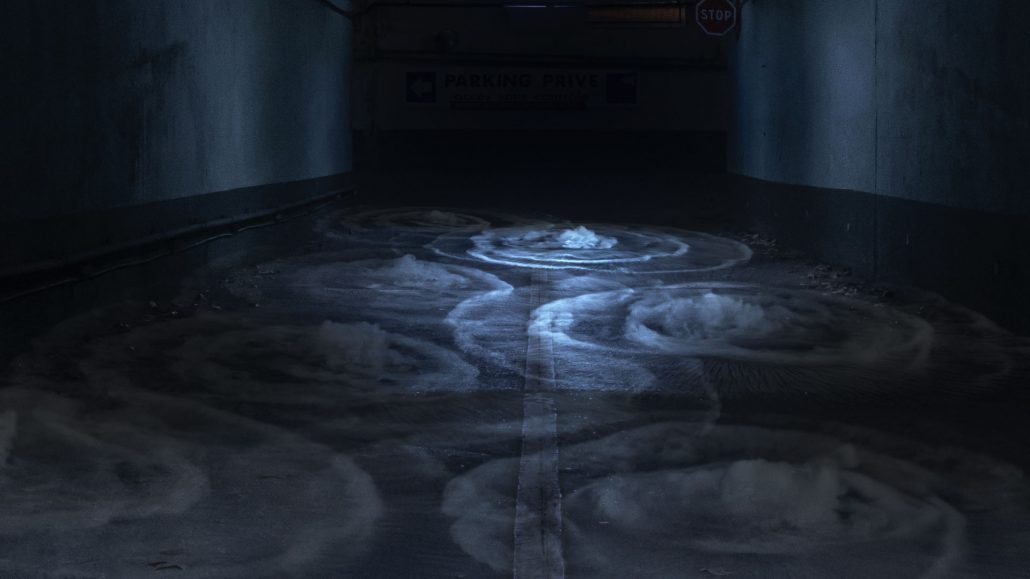 Create an eerie atmosphere by adding these to your shots. We’ve angled these effects so that they will fit onto the ground of your scene and match the perspective perfectly.

We even have several variations in style, such as slow-motion and turbulent!

You can even get creative with the unique appearance of these mist effects, and build an awesome sci-fi portal effect!

Want to see how these were made? Check out our first ever episode of VFXperiments, where we take you behind the scenes and show you how we made some of these insanely cool assets.

We’re excited to see what you create with these effects! If you’re interested to see more of ProductionCrate’s content, check out our UFO effects!

Space is every VFX artist’s dream!

Planets, nebula, galaxies, stars, black holes and thousands of other interstellar features can be built together into a spectacular colorful mess.

In cinema, there are no rules to what our galactic scenery can look like. We can experience the dark and dangerous feel of Interstellar, or the vivid and lively action packed sets from Guardians of the Galaxy.

If you’re new here, ProductionCrate is a library of thousands of visual effects, sound effects, graphics and other creative resources – all available for you to download to save time and money! Here you can access a whole bundle of space related effects to build your incredible VFX projects. 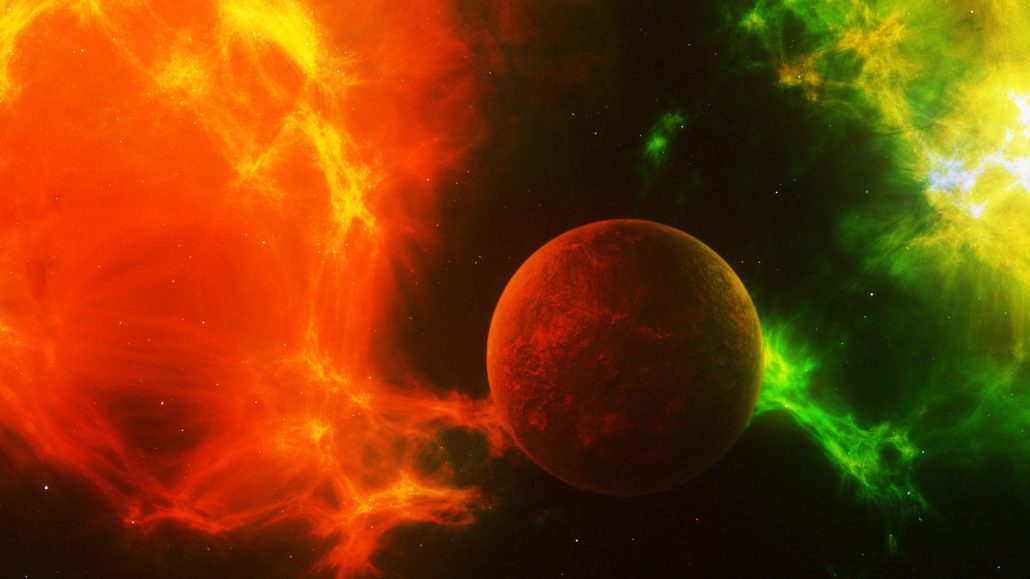 One of our favorite collections is the huge array of nebula assets. These come as high resolution (4000×4000) graphics that you can composite into your space backgrounds. This can be done in most compositing software, such as After Effects, Hitfilm or Nuke. You may even drop several of them into your 3D software to create 3D nebulae instantly! 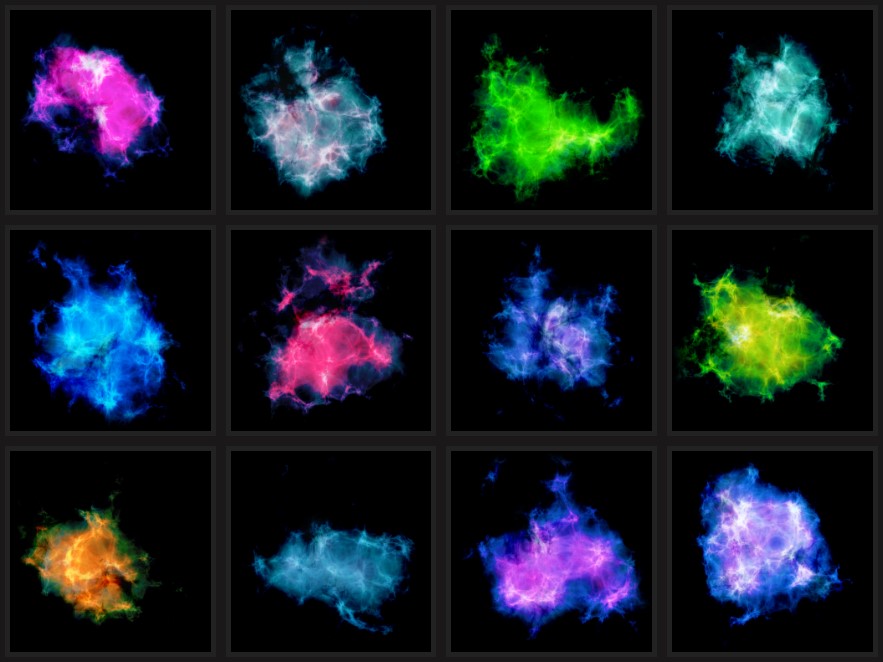 If you need to get started, check out our basic star texture background. This will be the perfect canvas for you to start building out your scene.

We’ll love to see what you create with these space VFX assets. You can check out a full tutorial which will breakdown the pipeline behind CGI a space scene.

If you want to check out even more cool content, have a look at our Helictoper VFX tutorial!

With only a few days to go until Christmas takes over, it’s time to go over one of the most fundamental uses of VFX compositing – snow!

Whether you’re shooting a Christmas comedy or a reflective and chilling scene for your film, snow can always help add value to your project. But not everyone has access to weather manipulating machines or industrially sized snow cannons, and so in these cases, we must rely on VFX to composite the snow into our footage.

FootageCrate has a huge library of snowfall effects, ranging from realistic to cartoon styled. Similar to all of our content, these snow effects are pre-keyed, meaning that transparency is preserved when you drop the snow footage on top of your shot without any further hassle! You can take a look at our collection of snow effects here.

Let’s get started with the tutorial! You can use almost any software for this, including After Effects, Hitfilm, Nuke and Premiere Pro!

I’ve taken this stock image from Pexels.com, so if you want to follow along, be my guest and download the image. 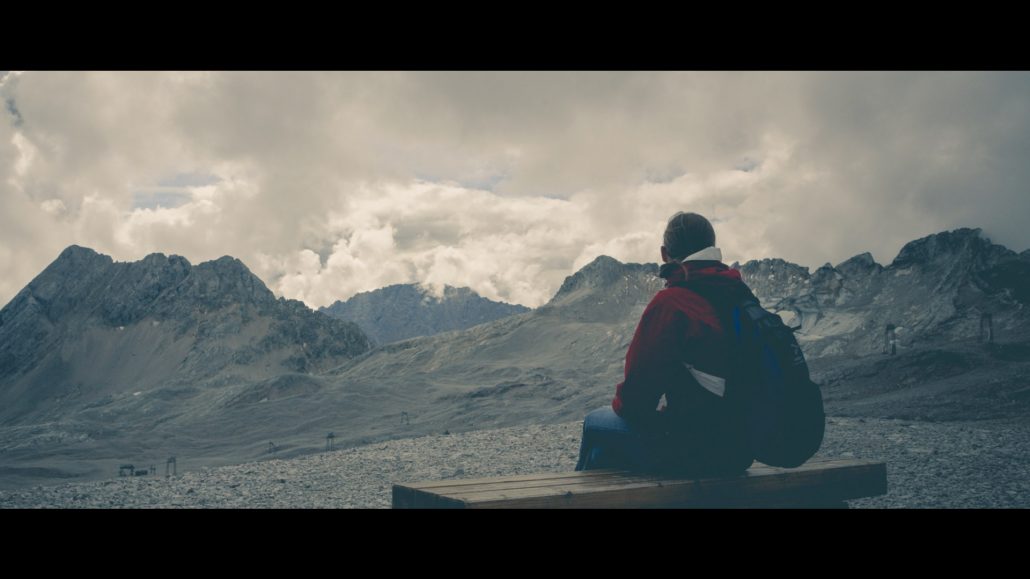 One step I’ve often seen people skipping is that they don’t add depth to their snow effect. What I mean by this is that it’s quite clearly visible that there’s just a snow effect simply being placed on the footage, giving it a “flat” feel. We’re going to give the snow volume by first creating a solid that matches the colour of the lighter clouds, and making it so that the further away the footage is, the higher the opacity. This can be done through masking or opacity painting. 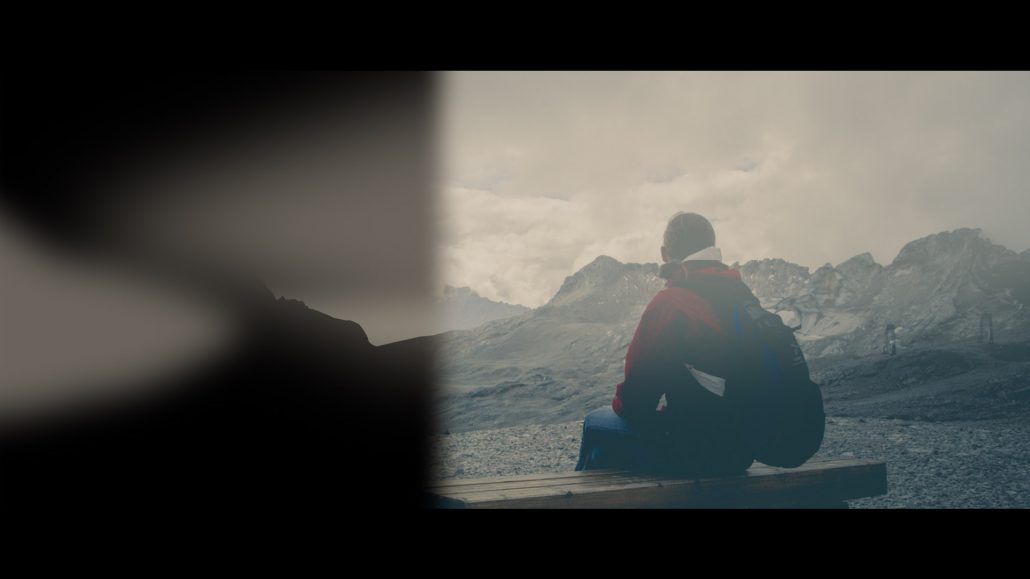 Already we’ve given a nice volumetric feel to the scene. This will look like snow that is too distant to be seen by the camera individually, and so appears like a cloud.

We can now mask out or rotoscope the foreground so that it doesn’t sit behind this fog.

It’s now time to drop the snow effect into our video. I’ve taken two different effects from the FootageCrate website, which is the “snow background” and the “slow snow falling”. I’ll have the first placed behind the foreground, and the second in front of it. This makes it appear as if the subject is sandwiched between the two snow assets so that they feel part of the scene! 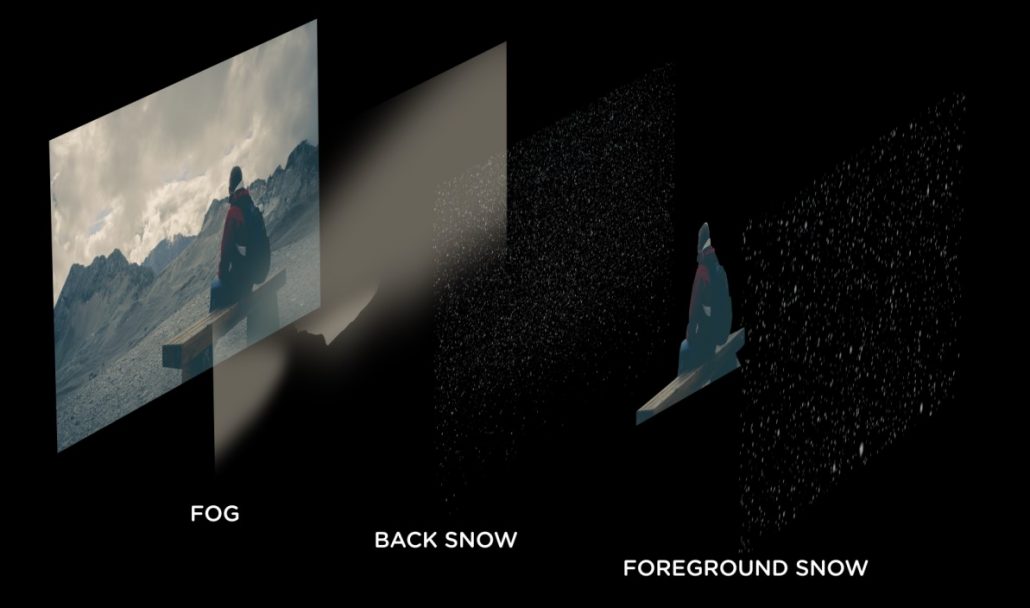 Apply these snow effects with an add/lighten/screen transfer mode so that the dark halos around the snowflakes are invisible, and admire your now far more chilling scene! You can add further colour corrections to then cool the image with bluish tints. 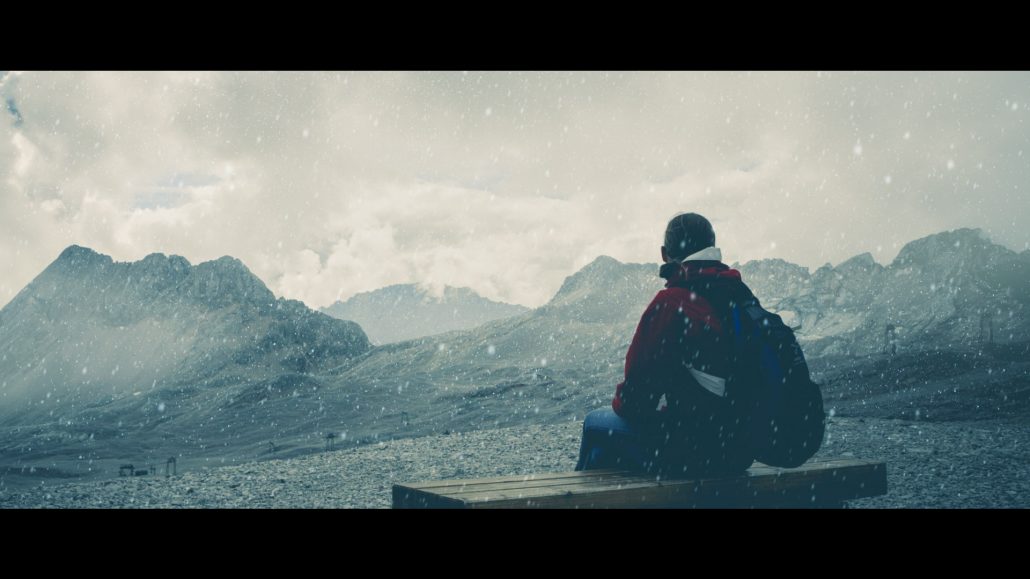 Thanks for reading this tutorial! If you’d like to learn more VFX, take a look at our helicopter compositing tutorial!

Volcanoes are some of the most incredible spectacles of the natural world. Our only issue is that lava is very hot, and isn’t readily available on most movie sets.

That is what has led us to create this brand new bundle of volcano themed VFX assets, all ready to drop into your video. These range from 1080p all the way to 4K, and have been pre-keyed to streamline your editing workflow.

Create an apocalyptic landscape using one of our several magma-bursts, giving the appearance that the ground is breaking up into absolute chaos! You can even check out our fire and ember VFX assets to further add detail into your compositions. 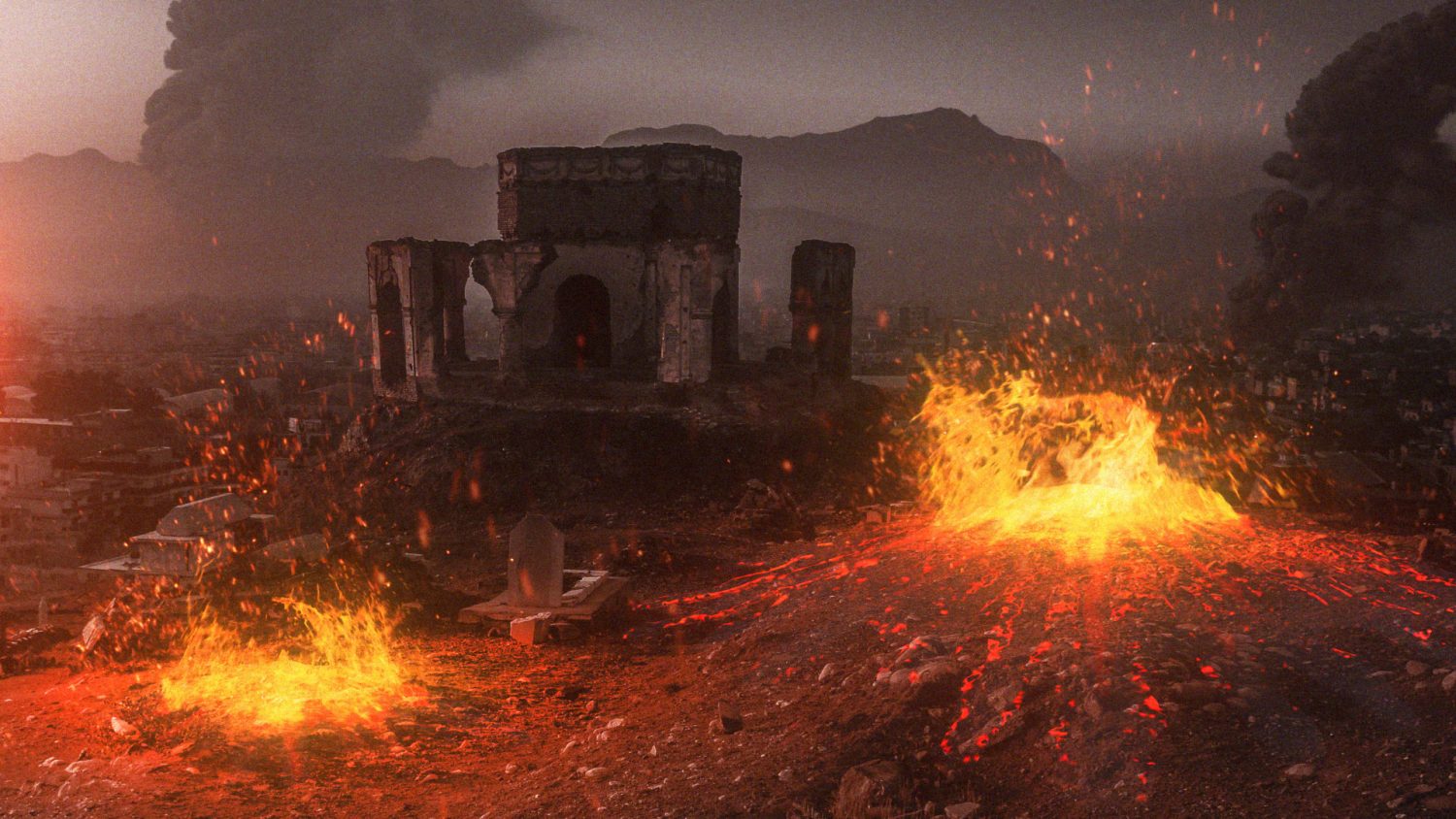 Our full range of content includes lava bursts, and lava falls, which is the perfect combination to get started!

Are you an After Effects User? Download our Lava Project file Here

There’s no doubt we’ll be adding more of these in the future, so keep updated by registering to ProductionCrate today, and access one of the worlds greatest libraries for visual effects, sound effects and music.

If you’re hungry for more VFX content, check out our Nuclear Bomb tutorial.

Halloween is approaching, which is the perfect time to think about the spooky areas of VFX, like blood! It has always been very close to our hearts when working in special effects. Producers tend to want to keep their actors alive, and so studios must find ways to recreate these gore-filled sequences using safer methods.

You’ve probably heard of the classic squib! These are miniaturised air cannons which can be remotely set off, forcing blood-coloured fluid effects into the air. This creates the illusion of a bullet impact! However, these can be expensive, timely to set up and will ruin whatever you’re wearing. This is why the industry has been shifting more towards compositing these blood effects digitally using VFX.

This shot featured in our “Put a gun through a hand” tutorial did exactly this. We used blood explosion assets which are all available to download on FootageCrate. We even have free blood impacts as well, so there’s nothing to stop you from turning your movie into a gruesomely realistic action adventure!

Our HD pre-keyed blood explosions are easy to composite, it’s as simple as dragging and dropping the effect into your video using any compositing software. Popular ones to try are Adobe After Effects, Hitfilm, and Premiere Pro which are all accessible to learn from our countless tutorials.

After hosting this content for more than 8 years, we’re proud of our blood splatter VFX, and we hope you have great fun using these in your video.

Magic and wizardry is some of the most enjoyable forms of VFX for an artist, and are often the first thing new users are eager to try out when learning. Conjuring these effects into your videos do not require any dark magic, just a ProductionCrate account and willpower!

We have an entire catalogue of spectacular content that you can apply to your videos with ease. Lightning powers, energy beams and even Doctor Strange’s personal favorite spark portal. The overwhelming number of choices give you more power than you will ever need.

Our downloadable magic VFX in action!

We have already covered a plethora of ways in how you can edit these effects into your video on our YouTube channel, all of which offer a great insight into the workflow a VFX artist can expect working in the magic realm. If you want to check some of these out, take a pick from:

If you want to read more on adding these magic VFX to your video, learn about how you can become like Scarlet Witch here!